On the evening of Wednesday August 15th, 2007, Joe O'Blenis paddled into the Brechin Boat Launch in Nanaimo at 8:00 PM, successfully completing his solo circumnavigation of British Columbia's rugged Vancouver Island. In doing so, Joe shattered the previous speed record of 28 days, having completed the expedition in just 23 days and 10 hours!

The expedition was done with support from Kokatat Watersports, Sea kayaking UK (Nigel Dennis), Comox Valley Kayaks and John Kimantas of the Wild Coast (Guidebooks and Marine Atlases). Also helpful in countless ways were a good number of people, too numerous to mention in this brief press release. Many thanks to you all!

The expedition held many challenges right from the start from the dense fog at launch time to the headwinds of up to and over 40 knots for the first 17 days. Rough seas, limited landing spots and the ever-persistent winds took their toll during the expedition but despite the challenges, the rewards were equally plentiful. From the magnificent scenery of Vancouver Island to the vast array of marine wildlife with near daily sightings of a variety of whales, sea otters, seals, sea lions as well as deer, bears, eagles and so much more! The beautiful but incredibly rugged shoreline of the west coast of Vancouver Island with its cliffs, sea stacks, caves as well as number of long sandy beaches made for an amazing and inspiring journey.

Highlights of the trip included camping on the outer tip of the Brooks Peninsula complete with a large bear just down the beach from my camp, rounding Cape Scott in pristine conditions, a cold can of beer in the Bunsby Islands compliments of the staff at West Coast Expeditions on Spring Island and of course finishing the expedition back in Nanaimo with the hot shower & shave afterwards closely followed by delicious chicken wings and beer at the pub with good friends!

The new record, four and half days faster than the previous mark, is now there for the taking. In Joe's words, It is my hope that the record will fall within the next year or two, giving me reason to do it all over one more time, using the knowledge gained from this expedition to shave a few more days off the mark and, hopefully, beat the time from Keirron Tastagh and Jeff Norville who paddled a tandem around the island in May 2007 in a record time of 19 and a half days in a Triton double kayak.
Hopefully there will be some stunning photographs from the expedition in the gallery once Joe has gone through them all!
Sponsors List
Sea Kayaking UK
Kokatat Watersports
John Kimantas/ The Wild Coast
Comox Valley Kayaks

2004 saw Jeff Allen and Hadas Feldman complete a six month circumnavigation of the Islands of Japan.Starting in Tokyo in early January, they paddled south, and after 139 paddling days they eventually closed the circle on November 4th. The cold Siberian Monsoon driven winds hampered their progress over the winter months but by early April made it as far as Tsuruga Wan on the West Coast, Visa restrictions and funds meant they had to return home at this stage.
Jeff and Hadas returned mid summer to complete their journey, with nearly twice the distance still to cover they new the race against time was on and in what turned out to be the worst year in recorded history for Typhoon activity they managed to complete with only hours to spare before they once more had to leave the country due to their visa's running out. During the trip they experienced much wildlife, from Sharks and turtles in the south and Bears and eagles in the North.
Jeff and Hadas presented 'Paddle Japan' at the 2005 symposium, for further details on presentations on this amazing journey contact Jeff Allen.

In 2008 Rowland Woollven and Cath Tanner are to fulfil a long-held dream the circumnavigation of mainland Great Britain by sea kayak. Fewer than 20 people have completed this journey since Nigel Dennis and Paul Caffyn made the first circumnavigation in the 1980's. Of those, only 3 have been women, so Cath will become only the 4th woman round Britain. Rowland will, at 54, be the oldest paddler by far to complete the circumnavigation! The expedition has already gained the support of Cath's employers Duchy College, Cornwall (they have granted her a sabbatical for the duration of the expedition), and Nigel Dennis, one of the UK's leading paddlers and a sea kayak manufacturer. Nigel has sponsored Rowland as a Sea Kayaking UK sponsored paddler for many years, and has provided Cath with a custom built Explorer LV for her to use. At the end of the expedition, Cath too will become a Nigel Dennis sponsored paddler.

In the summer of 1925 the Danish government relocated 90 Inuit from their original settlement of Angmagssalik, the only settlement on the East coast, to a settlement they created at Scoresby Sound. This expedition will attempt to reconnect the two communities by kayak, the original form of transport of the Inuit, by sea kayaking from Scoresby Sound to Angmagssalik, a distance of over 600 miles.

Witness Listening to the people of Greenland

At the end of May 2009 we flew over the pack ice on our way to do Upernavik, the departure point for our trip, many questions filled our heads. Will we be equal to the challenge? Have we thought of everything? Have we not set off too early? But once we have landed, there is no room for any doubts the preparations take priority taking delivery of the kayaks, checking the equipment, checking certain information about the route, finding a rifle
The project had been growing in our minds for a long time, but had only really taken shape eight months earlier.

Paddle the stunning coastline, using conditions on the day to the best advantage for a weekend of individualised skills development, whilst looking out for the wildlife! 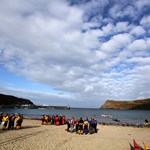 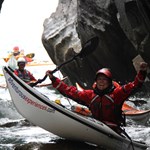 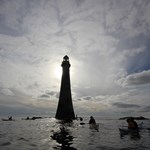 Meet the UK kayak-maker selling to the Inuit

Meet the UK kayak-maker selling to the Inuit 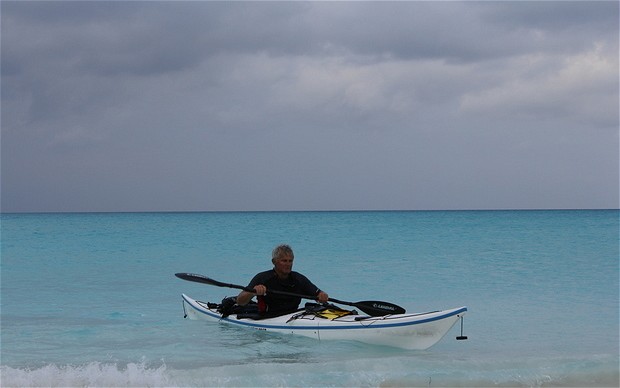 The Daily Telegraph - "Nigel Dennis can scarcely remember the last time he received any publicity in his local newspaper, n...ever mind on the Global economic stage. But yesterday his small company found itself endorsed by David Cameron".

If you don't have a copy you can check out an e-version. We should perhaps mention it was a UK circumnavigation that Nigel was the first to complete and Nathalie and Alain are from Monaco!!

Congratulations to all swimmers!!

A team of celebrities completed their gruelling 56-mile (90km) charity swim across the Irish Sea from Holyhead on Thursday morning.

It took them 35 hours and 18 minutes to complete the challenge.