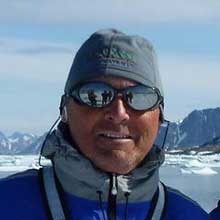 Martin has been involved with NDK from the early days of the 1980's- and over the years has worked on many of their courses and expeditions.

He was one of the first to circumnavigate Ireland back in 1983 and has since gone on to organise courses and lead trips in the UK, Norway, Iceland, Canada and Greenland.

For many years he worked in Ontario, Canada, leading dogsled and ski trips during the winter and sea kayak and extended open-boat trips in the summer months.
During this time, he lead several trips down the Missinaibi River into James Bay and completed a solo circumnavigation of Prince Edward Island.

Since 2000, his main interest has been the East coast of Greenland, where over the years he has gained a vast amount of experience and knowledge.
In 2004 he and Pete Jones undertook a journey north from Ammassalik to Lake Fjord, and re-established Gino Watkins memorial cross.
In 2006 again with Pete and this time joined by Phil Clegg, he undertook an unsupported trip from Scoresbysund to Ammassalik, a paddle of approx 700 miles along a totally uninhabited and exposed arctic coast.
Unfortunately the pack ice that year was very bad and the team were forced to retreat having got about half way.
Martin is now based in Shetland, where he runs a variety of courses, in these most northerly of the British Isles. He is a SCA CCP and the LCO for Shetland.
Each summer he guides trips in the Ammassalik region of Greenland where he has a fleet of kayaks and equipment permanently stored. These expeditions can cater for all skill levels, ranging from youth groups to advanced trips for experienced paddlers - in 2009 one of his more experienced groups successfully reached Gino Watkins Memorial Cross.